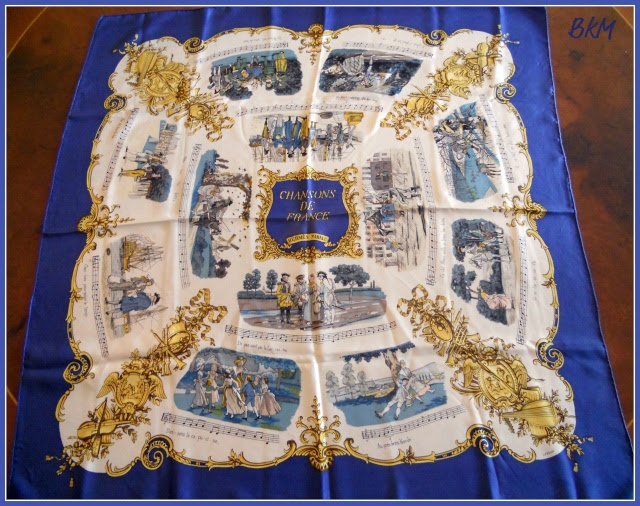 Chansons de France is a classic scarf designed by my most admired Hermès artist, Philippe Ledoux. It's very sought after, rare and difficult to find nowadays and it normally gets very high prices in auctions.
It depicts most of the typical elements of Ledoux's work: minute detail in human figures, architectural elements, elaborate ornaments and historical aspects.


The title of the scarf is shown in the center of a gilded rococo frame: The corners of the scarf feature four elaborate ornaments with a riot of decorative elements: Flowers and other vegetal decoration, musical instruments, palm leaves, cherubs, ribbon, scrolls and so on, all of them characteristic elements of the Rococo Style. Rococo (pronounced /rəˈkoʊkoʊ/) took place in the early part of the 18th century in Paris as a reaction against the grandeur, symmetry and strict regulations of the Baroque. Its main features are a strong usage of asymmetrical designs, curves, gold and creamy, pastel-like colors. 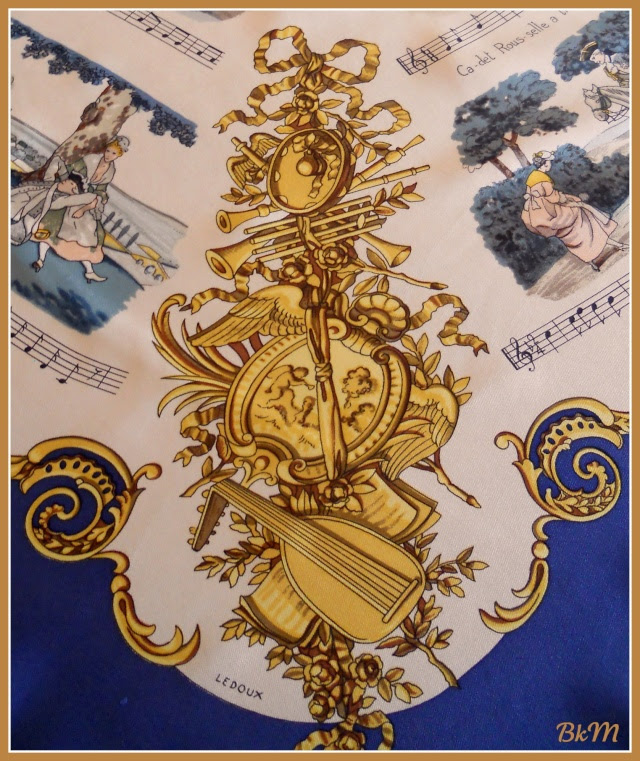 The theme of the scarf is the traditional Chanson, which is in general any lyric-driven French song, usually polyphonic and secular. A singer specialising in chansons is known as a"chanteur" (male) or "chanteuse" (female); a collection of chansons, especially from the late Middle Ages and Renaissance, is known as a "chansonnier". French solo song developed in the late 16th century. Another offshoot of chanson called chanson réaliste (realist song), was a popular musical genre in France, primarily from the 1880s until the end of World War II. Born of the cafés-concerts and cabarets of the Montmartre district of Paris and influenced by literary realism and the naturalist movements in literature and theatre, chanson réaliste was a musical style which was mainly performed by women and dealt with the lives of Paris's poor and working class.
There are twelve vignettes displayed in a circular pattern around the central medallion, all of them are accompanied by a fragment of its score.
Beginning from the bottom left to the right: 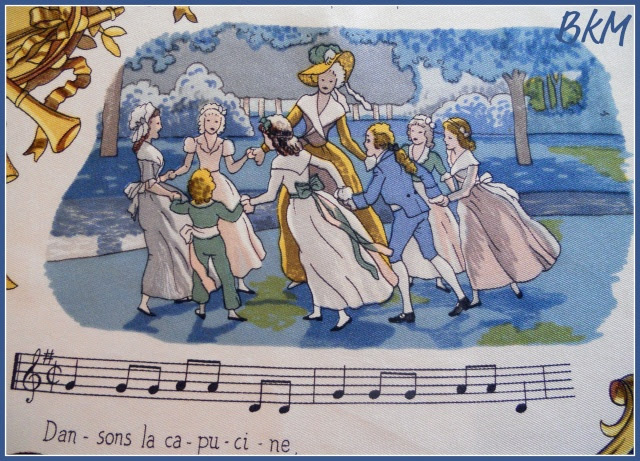 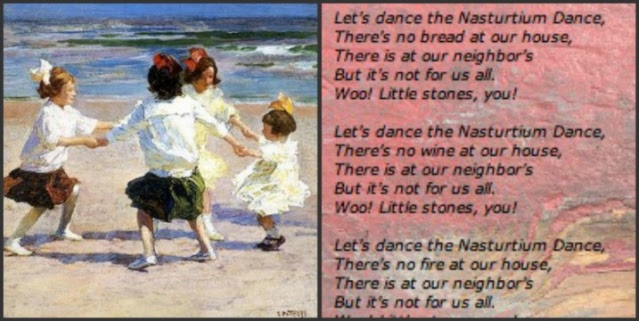 The second vignette in the bottom right is Aupres de ma Blonde, "Next to My Girlfriend". This tune already existed in the mid of the 17th century, it appeared during the French-Dutch War reigning Louis XIV. The verses were composed later by André Joubert who was taken as a hostage by the Dutch in 1674. The song was first seen in print in 1704.
There are slightly different versions of this song. It's also well know in Canada. 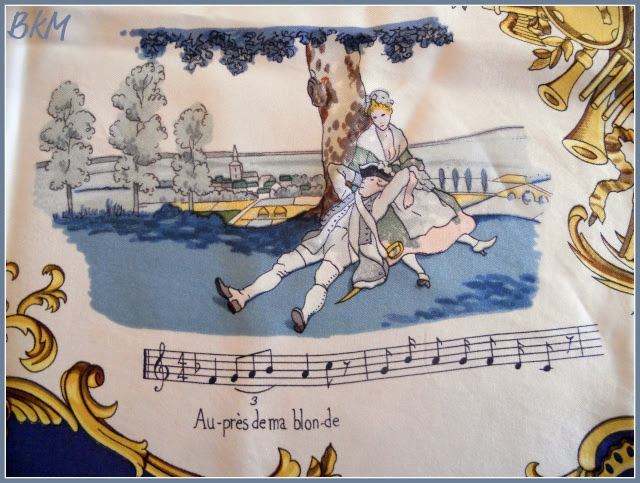 The song is still commonly played at parades. For the same reasons, it gained widespread popularity as a drinking song and nursery rhyme. 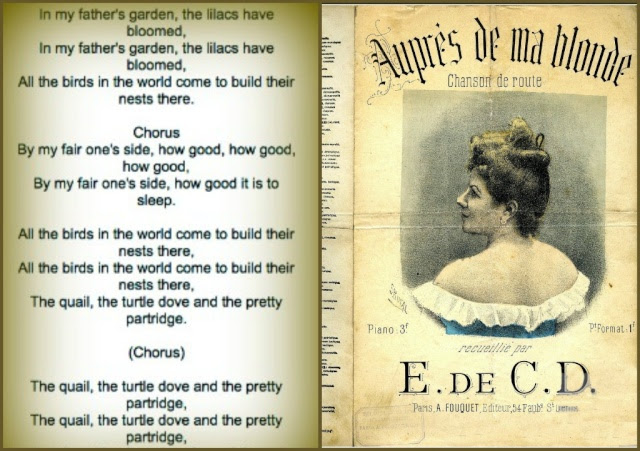 The third vignette at the bottom right corner is Giroflé, Giroflá:
From an opera bouffe in three acts, music by Charles Lecocq and text by Van Loo and Aterrier. It was first produced at the Théâtre des Fantaisies Parisiennes, Brussels, March 21, 1874. 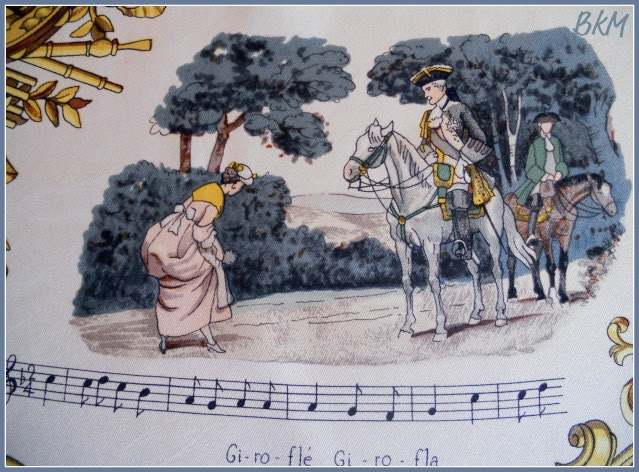 The scene is laid in Spain in the XVIII century. The story relates the pecuniary difficulties of Don Bolero, governor of the province with a variety of titles but no money. He is, in fact, badly in debt, owing 4,000,000 francs to Marasquin & Co., with no prospect of paying it. His available assets are his twin daughters, so remarkably similar in appearance that they can be distinguished only by wearing scarfs of different colors.
You can listen to Yves Montand's version of this chanson by clicking below:

Upper corner to the right, Il Était un Petite Homme (There was a little man). This little rhyme, whose author is unknown, is very popular with children because of its absurd and comical character. 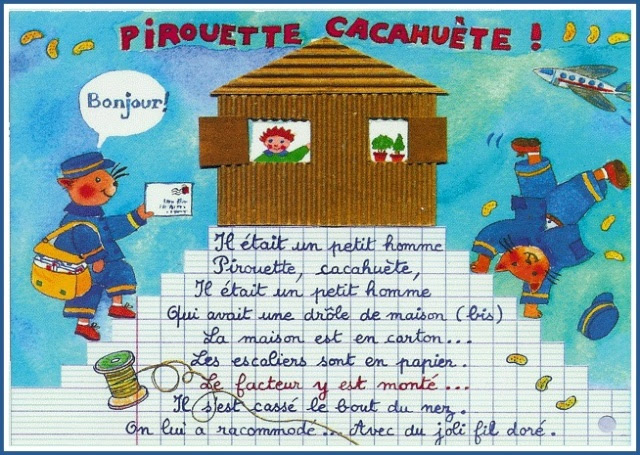 At the top of the scarf there are two vignettes, to the right top corner we found a scene of the song Il Pleut, Il Pleut, Bergére (It's raining, shepherdess) 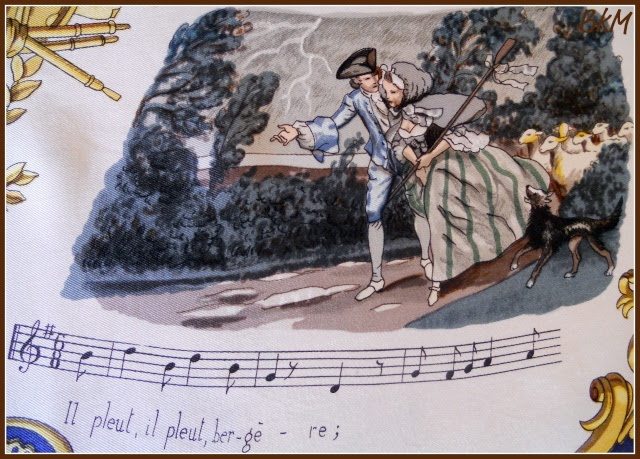 This song is taken from the operetta Laure et Pétrarque, written in 1780 by Fabre d'Églantine, with by Louis-Victor Simon.The shepherdess to which the song refers is the French queen Marie Antoinette who loved to play the shepherdess in the Hameau de la reine of the Palace of Versailles. The rain and the storm coming could be an allusion to the troubles that led to the French Revolution.
At the top left we found La Palisse eut peu de Bien. The Song of la Palice (in French: la chanson de la Palisse) is a burlesque song attributed to Bernard de la Monnoye (1641–1728) about alleged feats of French nobleman and military leader Jacques de la Palice (1470–1525). From that song came the French term lapalissade meaning an utterly obvious truth 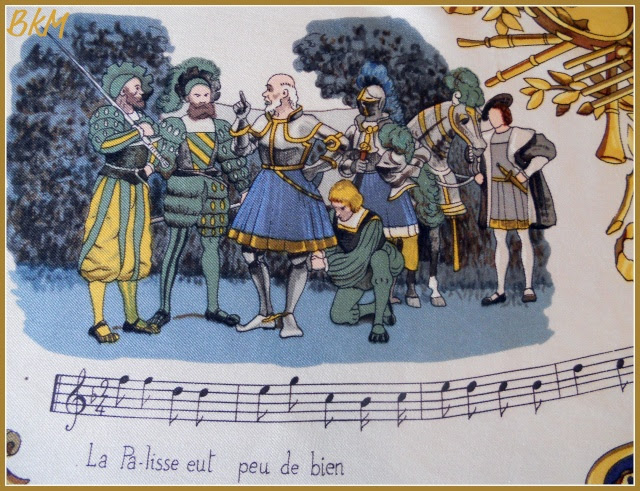 Jacques de la Palice died in the battle of Pavia (1525), while fighting against the Spanish armies as a marshal under Francis I. The epitaph on his tombstone reads:

At the top left corner we can see a vignette of Ja'i du bon Tabac, a French song attributed to Gabriel Charles, abbot de L'Attaignant (1697-1779).
The vignette shows a scene of a nobleman using his nasal snuff. Snuff is a product made from ground or pulverized tobacco leaves, it originated in the Americas and was in common use in Europe by the 17th century. 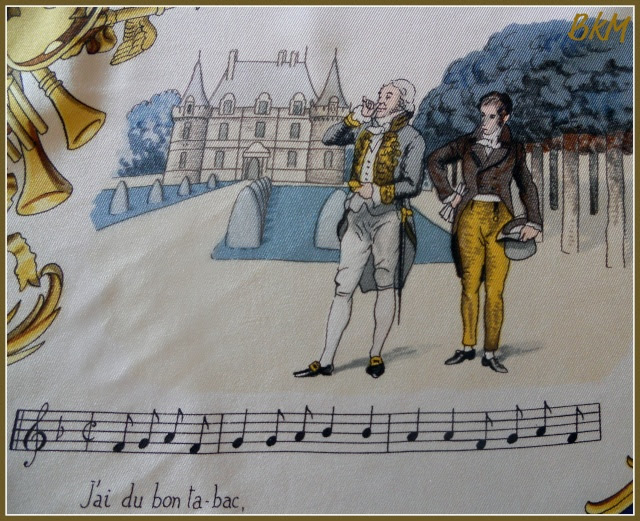 The next vignette shows a scene from the song Chantons Pour Passer le Temps. The Norman sailors sang that melody when traditionally "saw the capstan", which is a vertical-axled rotating machine developed for use on sailing ships to apply force to ropes, cables, and hawsers. 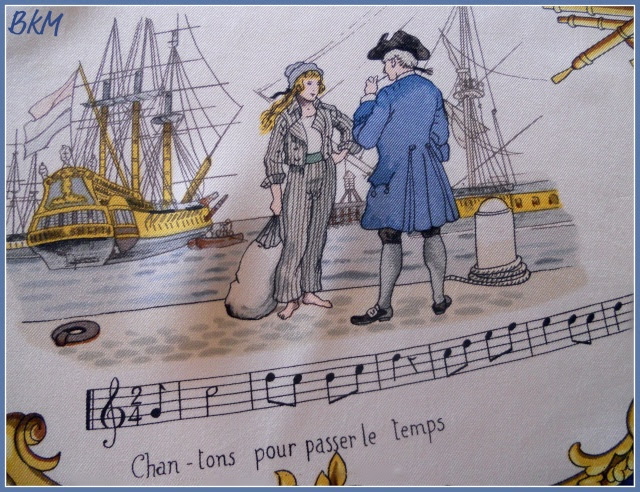 The sailors would coordinate the rhythm of their movements by singing this particular type of sea shanty as they walked around the capstan.

There are four more vignettes around the central medallion. From left to right, the first one is En Passant par la Lorraine, this song became famous following the proclamation of the Third Republic (1870): 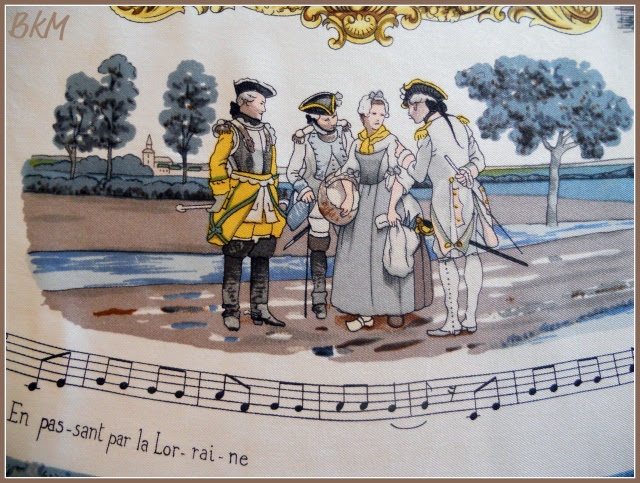 The following one is Cadet Rousselle a Trois Habits, the song satirized a French bailiff by the name of Guillaume (William) Rousselle, widely known as Cadet Rousselle. He was seen as a jovial bon vivant, a little eccentric, but he enjoyed the sympathy of his fellow citizens. The song inspired a French film by André Hunebelle in 1954. 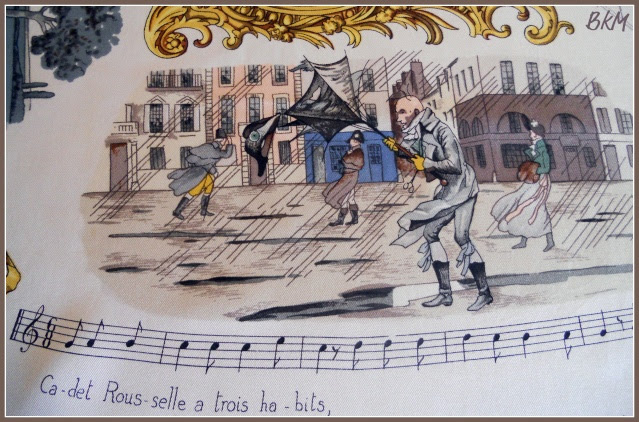 To the right we found a vignette based on the song Bon Voyage Monsieur Dumollet, composed by Marc-Antoine-Madeleine Désaugiers. This is possibly one of the pretties drawings on this scarf because of the beautiful details, body language and general atmosphere: 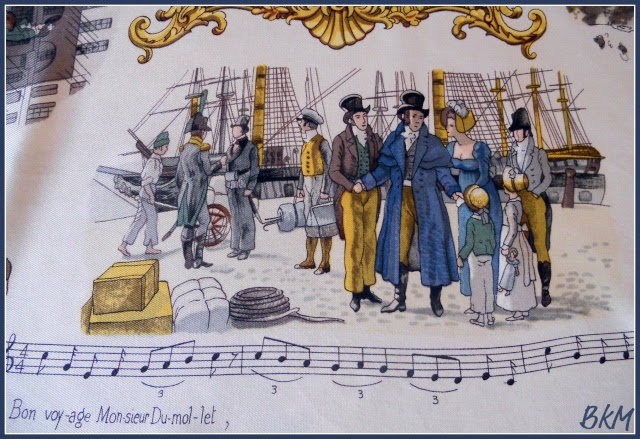 The last scene is Menier tu Dors, a french circle song which tells us the story of a miller who felt asleep while his mill was spinning, a bell ringing in each round allowed the miller to assess the speed of the mill, a passerby warns the miller: "your mill is spinning too fast". In this circle song, the children mock the movements of the mill. 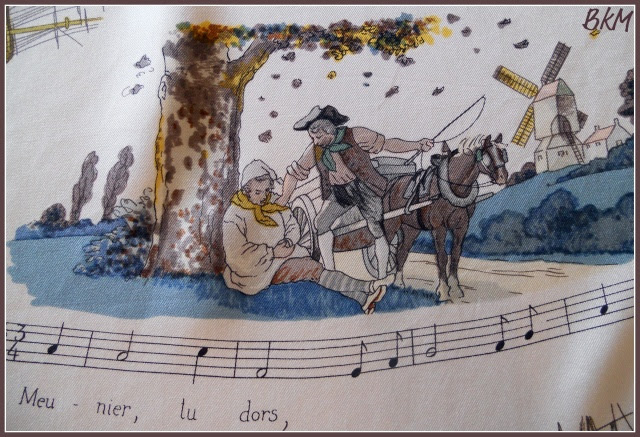 I'd like to finish this long post with some pictures of other Chansons de France owned by two good friends of mine, a brown carrè property of Bonnie, here displayed with her beautiful Havanne Birkin: 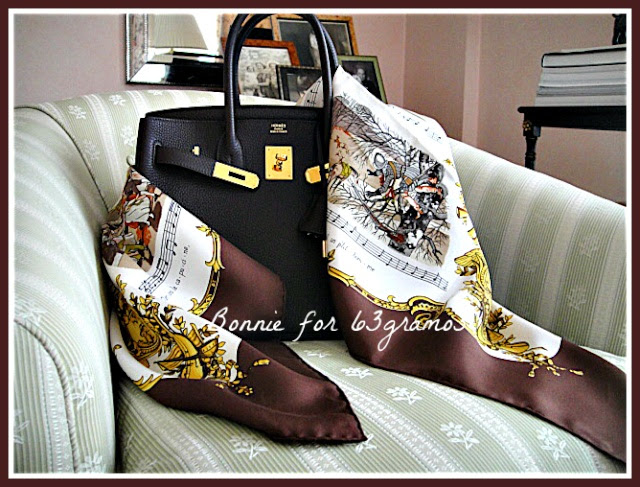 And dear Pauillac's  special edition gavroche presented in a cute box. Thank you both for your pictures. 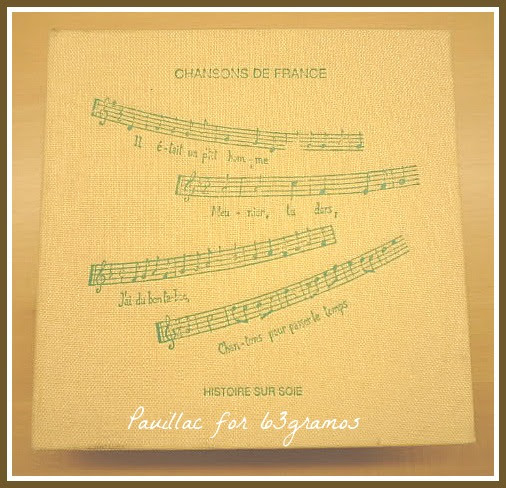 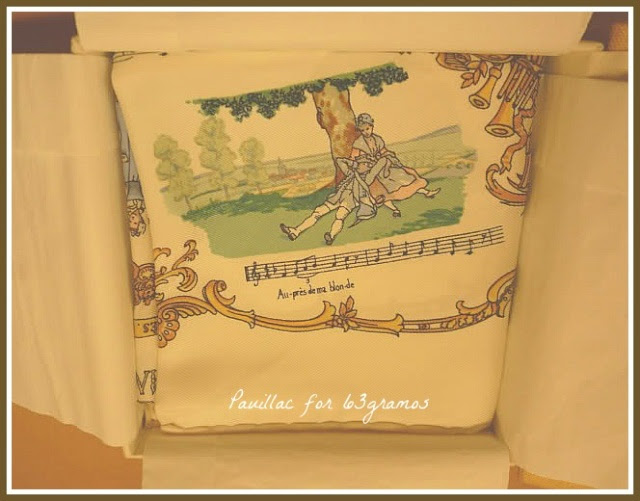 Some of you have asked for some action pictures of the scarves I review in this blog. Lately, I'm wearing vintage silks "in pairs", I think it's a way to make them look updated. Here you are a picture of Chansons de France paired with Paris London (Ledoux 1967). 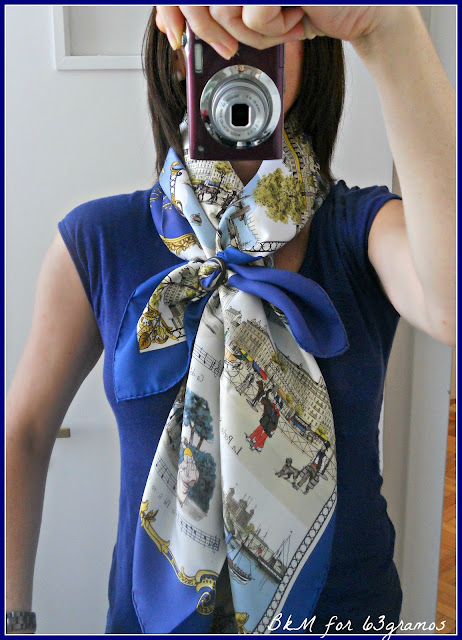